Losing a phone can be a devastating time for even the most technology inept of us. We use the little electronic-laden bricks to connect us to the world, record our memories and share experiences with friends and family. However when Scott Herder lost his iPod touch during his travels someone else was going to take him on a different kind of journey. A Monk in his Phone.

Herder says that after losing his iPod Touch earlier this year he felt like kicking things and was furious with the world, but managed to accept it and move on. The reason he took the iPod instead of his iPhone on his eight month excursion to South East Asia was exactly in case something unfortunate like this happened. It wasn’t until a month later that strange photographs started appearing in his iCloud camera roll.

At first it was a portrait of a man in a shirt having drinks which although surprising didn’t give Herder excuse for alarm. It was when a few weeks later, almost two months after leaving his iPod on a restaurant table in Laos that this image appeared.

having a picture on your iPhone of a shirtless monk laying down in what looks like a locker room is definitely something you would remember taking.

And from that point on things started getting pretty strange in what became dubbed as ‘The Monk in my Phone”. Pictures upon pictures started pouring in of different monks, some of them even flexing for the camera. Remarkably instead of feeling ire towards the new owner of his iPod, Herder instead felt a compassion and let his new found friend take him on an exploration into a completely different way of life.

It transpires that our new secret friend is not all that dissimilar from the rest of us. With a penchant for taking that perfect selfie and fun goofing around, Herder shared just a fragment of the 350 or so photographs that have been pouring in.

Wherever you are, unnamed iPod owner, we look forward to seeing where you take us next. Keep taking those selfies and keep sharing your experiences as you have a very unexpected worldwide audience. 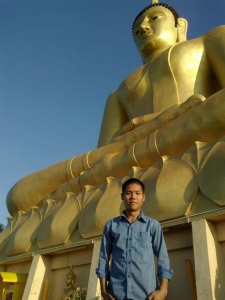 Scott Herder has begun sharing his experiences on Instagram so make sure you follow him there to keep up with the Monk in his Phone.

One thought on “The Monk in my Phone”