Back in the 1970s the photographic art world was experiencing a transformation of sorts. The rise of the celebrity photographer, especially in America set a precedent in the contemporary art market. Photographer’s work started selling for serious money. Mike Mandel, then a student of the San Francisco Art Institute noticed the change and put his mind to creating a body of work that would first satirise but later memorialise the celebrity photographer of the day. 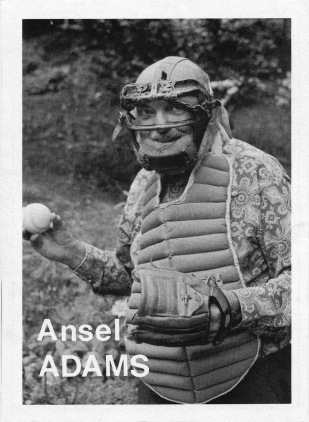 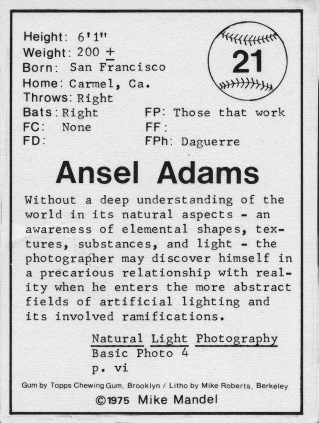 In what would turn out to be an audacious undertaking, Mandel would spend the next Summer travelling the length and breadth of the United States on what he called a “baseball-photographer shooting spree.” Visiting, and often lodging for free in well known photographer’s homes, the project sounds like a far fetched dream for today’s camera wielding students. In an article for B&W magazine almost a quarter of a century later, Mandel explained why this wasn’t unusual for the time

…it seemed that the photo community was comprised of a group of dedicated artists, who, for reasons of politics, had been snubbed by the art world for having the audacity to negate the imperative of the unique, precious object. This world view synched with my own sense of anti-materialism as I found myself (literally) through the counter-culture. The photographers that I cared about were, by and large, people who were approachable-I could call up Robert Heinecken and come over. – 1999, B&W

As a small boy, Mandel like many of his peers collected baseball trading cards which he sought to trade and ultimately complete a set. Although never managing the feat (a friend of his did though) the experience and memory of incidental kleptomania remained. By mimicking the style and design of the rigidly-dynamic portraits and including key facts penned by the photographers profiled on the reverse the idea came to life.

The ‘statistical biography’ is as insightful today as it was a parody back during its creation. We learn that Ansel Adams’ favourite photographer (FPh) was Daguerre and that he took himself seriously, however when consulted on a favourite paper (FP) and favourite developer (FD) he was satisfied with “those that work.” Elliott Erwitt (#133) used an Argoflex with Tri-X film. His supporting statement is a simple recipe for salsa bolognese.

In homage to Mandel’s childhood obsession the series would ultimately become known as ‘The Baseball Photographer Trading Cards’ and become a phenomenon in their own right. With an impressive 134 names and bios in total the cards were distributed in the same method as collectable baseball cards; randomly assorted packs of 10, sealed in a polythene wrapper with a stick of gum included. 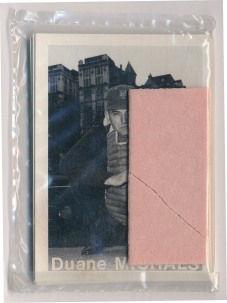 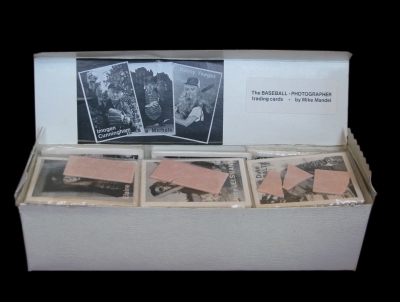 Using traditional methods over 400,000 cards were printed, packaged and distributed across the country to museums and galleries. The trading cards were so successful some venues held parties for swap meets and brought together the artist, the collector, the gamer and the commentator. A hit was born and Mandel’s project would propel his own career onto the stage shared by the photographers he sought to make the commentary on.

Perhaps preempting his own fate, card #24 is a young, athletic looking Mike Mandel as taken by Alison Woolpert who accompanied him on their 14,000 mile pilgrimage. 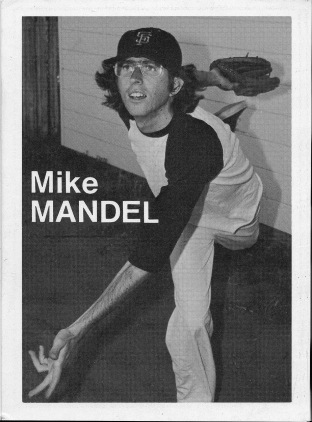 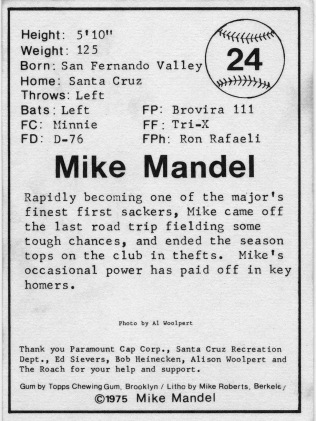 Inevitably there were some ‘celebrities‘ who didn’t make the final print run who in retrospect may look like glaring omissions today. Phogotraphy spoke to Mandel to ask if there were any he regrets not being able to include:

I visited Walker Evans and desperately wanted to include him, but he was pretty sick (he died 3 weeks later) nor did he have the sense of humor to go with it. Of course Friedlander and Frank would have been great, but I was on a long USA car trip and if people weren’t available, then they got left out. So I never was able to contact either. My guess is that Frank might have been tough to convince.

Being an American project there was no need for well known European photographers like Cartier-Bresson. One overseas player did find their way into the pack. Manuel Bravo (#32) as the only pitcher from the Mexican league, although not confirmed on his card’s flip side. 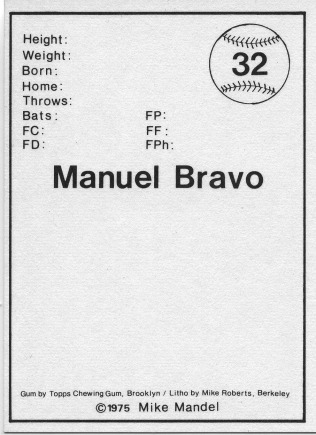 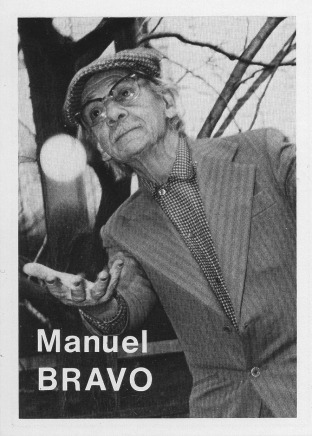 Age has transformed The Baseball Photographer Trading Cards. Not physically; their design is intentionally collectable, but in meaning. The satirical nature waned as time progressed and Mandel freely admits he finds himself selling complete packs at a premium “participating in the same commercial matrix that the cards originally intended to parody.” – and why not? Many of the photographers have since passed on and the encyclopaedic value remains. 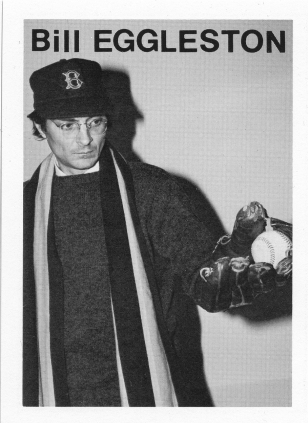 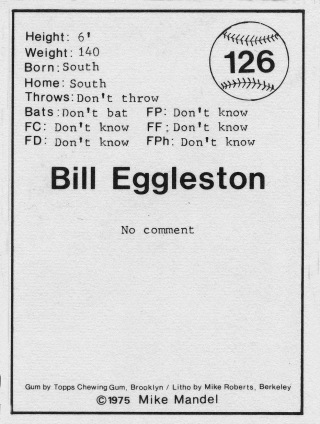 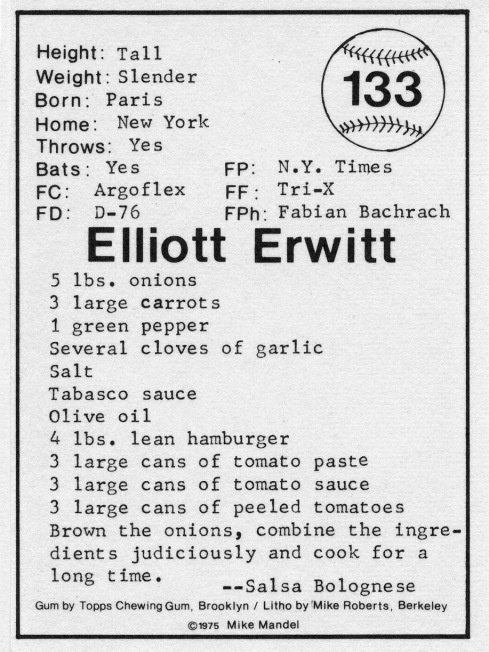 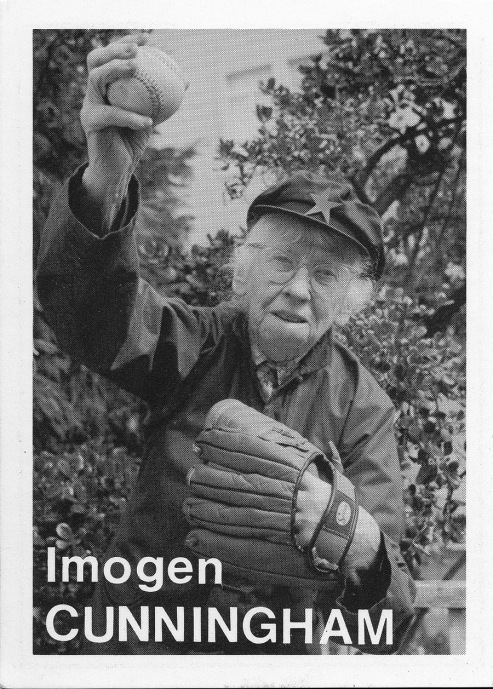 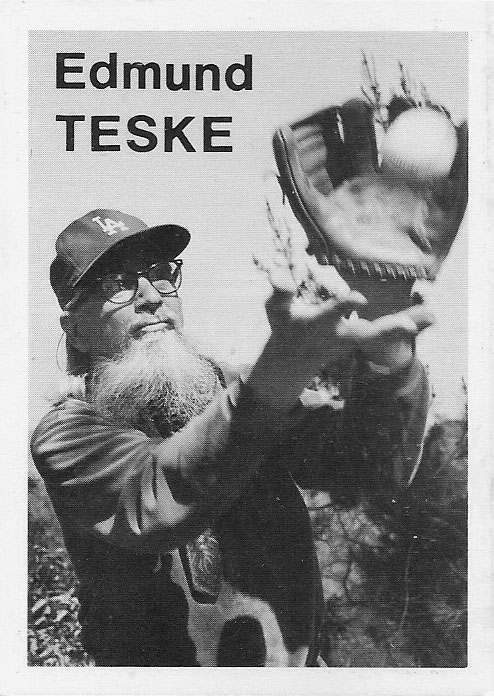 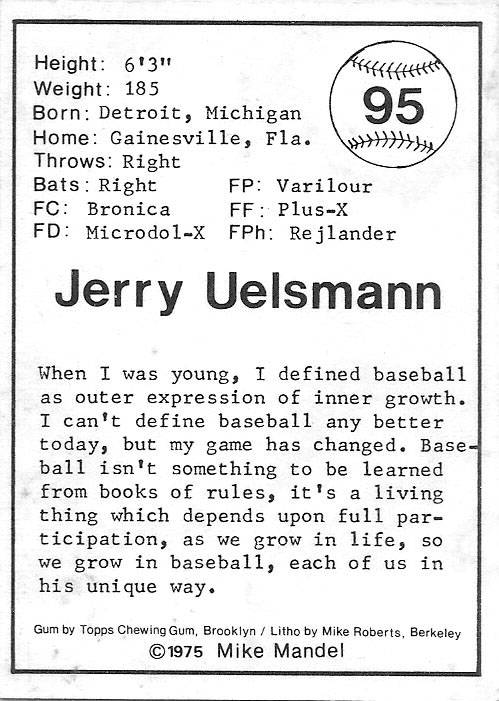 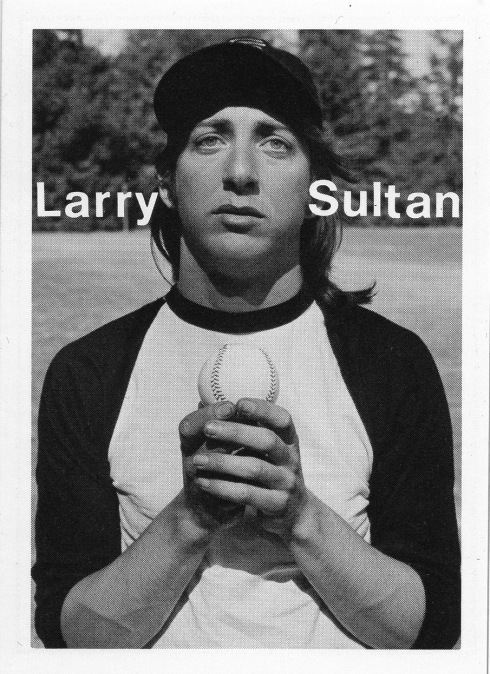 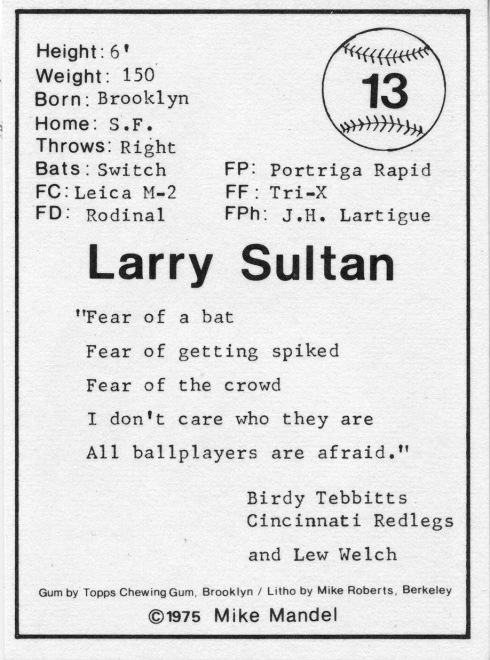 Certain differences would have to exist if the project happened later in Mandel’s career. Of course with the 1980s came the wider acceptance of colour photography in the art world and even later digital. But, it would defy the point he says, the timing of its conception was perfect.

If I could do it today, well there is no reason to do it today, for one. This was the moment when photography was welcomed into the art market and the new “celebrity” photographer was just on the horizon. So I think it was a project that was appropriate for exactly that time.

Thank you to Mike Mandel for speaking to Phogotraphy and allowing us to reproduce your work here. To see more of The Photographer Baseball Cards you can visit his Flickr site. If you’re interested in purchasing a complete set, Mandel has an overstock supply available for $5000.
For those not interested in the collectability value, a reprint was included as part of his ‘Good 70s box‘ that J & L Books and D.A.P published in 2015.