Two hundred and fifty miles above the Earth, a group of astronauts are orbiting our planet conducting experiments on the International Space Station. Occasionally they get to relax and have some down time and take photographs. Commander Scott Kelly, like one of his predecessors uses those precious moments in Space to take awesome photographs. 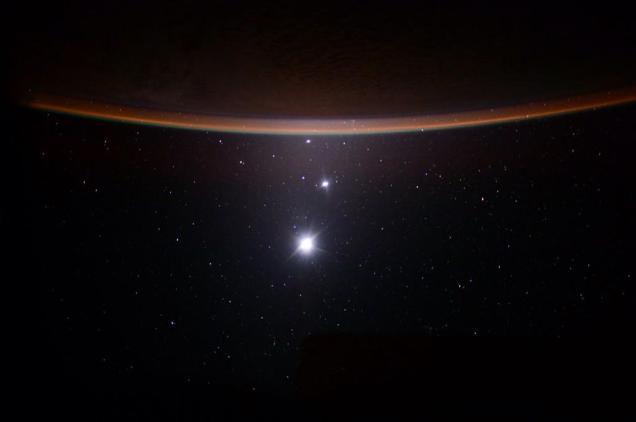 What you’re looking at is a photograph of (top to bottom) Earth, Jupiter, Venus and the Moon all lined up in the same image. The photograph was taken from the ISS on the 19th July this year and retweeted almost 10,000 times. Frankly I’m appalled at myself for not picking this up earlier, but better late than never.

The image strikes an uncanny resemblance to Stanley Kubrik’s opening title’s sequence to the 1968 film Space Odyssey 2001 or more likely, later in the film when we’re treated to a stunning view of the Jupiter & its moons suddenly aligning.

Don’t be fooled either into thinking Kelly’s image is anything more than a beautiful photograph of a conjunction of Solar System from his vantage point. This alignment has absolutely no effect on us, planets, our gravity whatsoever. In fact they happen quite frequently. If you’re interested in finding out more about our place in the cosmos and planning your next starry night photoshoot, check out Stellarium.org, a great tool for tracking objects in the night sky.