A black figure stands almost naked, flexed muscles holding a bar of weights signifying strength. This could easily be interpreted as a nuanced reference to the symbolic black power salute that emerged from the 1968 Olympics after Tommie Smith and John Carlos received podium medals. The image is unanimously considered as terrifying, not because it’s a symbol of strength against oppression, but the chest it is emblazoned on is that of 21 year old North Carolina racist recluse Dylan Roof who went on to commit an act of terrorism in a church filled with people of colour. 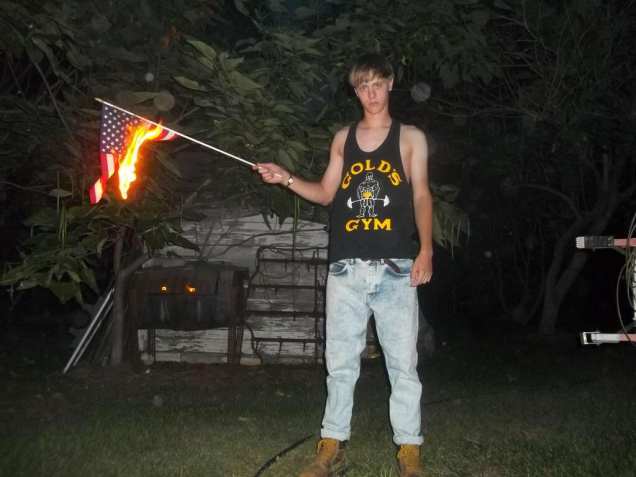 The photograph emerged as one of a set of series that Dylan had uploaded to a website he created called ‘The Last Rhodesian’ in which he also published a scrawling hate filled manifesto prior to committing the atrocities. Its purpose to link imagery, specifically photographs to his crimes and satisfy the visual thirst of an inevitably waiting gruelling media. To all intents and purposes it appears to fulfil that need on first glance. On the contrary further examination reveals a very confused, hateful individual.

To dissect the photograph properly we must disassociate Dylan from his crimes by removing all horrifying context that we know behind the image. Then we can present ourselves with a mystery to unravel. It is not until then we can start seeing how genuinely interesting certain elements within the frame are and ask questions about the photographer (artist?) behind the composition. We simply have to assume it was constructed with a lot of thought and by someone with intelligence.

Looking beyond the foreground a viewer’s gaze is drawn towards a pair of eyes to the left third of the frame. Their colour in association with the burning American flag suggests fire or searing heat; the face of the devil positioned perfectly looking on to the tragic soul its consumed. We know this in fact to be a furnace or barbecue, but the removal of context forces us to apply some sort of logic to its placement. A person seeing this for the first time with no knowledge of the consequences that followed could easily derive a different story to the actual background. The flag holder is beset by a presence, society, government, a higher power? We know this to be true, Dylan was raised in a traditionally racist area where until recently a symbol for black hatred, the confederate flag was displayed proudly above government buildings. 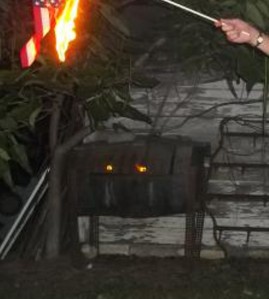 As we continue to piece together the construct a confusion becomes apparent. A pair of stonewashed jeans being held up on a skinny figure by a belt hanging flaccidly to accommodate the plus sizes of many Americans today. Workman boots with laces on show tied tightly over the ankle with their presence revered by the turned up jean legs. The tanned arms of a driver who takes pleasure in winding the window down in his truck and warming his free hand under the glaring Sun. The image topped off with a head of hair cut to the shape of a bowl and likely only there because it still grows. This is an all-American boy awash in the culture of his upbringing. Dressed accordingly like the slaves of his forefathers. Even the about face watch worn looks too thin to be a male timepiece, maybe it was his mother’s. We’re not fooled by the pretence of anger in Dylan’s face. It’s naivety, instilled by the devil looking on.

Under the still of night using to what most would agree is a digital camera with onboard flash facility the scene is littered with little ‘orbs’ which are no more a ghostly phenomenon than the meaning they are struggling to add. They are simply particles of moisture in the air, or rain closer to the camera lens, thus appearing out of focus. But these little round blobs give weight to the physical composition of the photograph, filling the darkened void on the right of the frame – a stroke of artistry. Its counterweight, the burning of an American flag is symbolic in its own conflict. A sign that to most means freedom and liberty, not undermining speech, thought or ambition. Destroying this and presenting it to the world as is done here shows that these values are not for you despite using them to exact your own message. Unless the ire presented is that of capitalism, of course. The destruction of a flimsily made American flag most likely not even sewed within the borders of the country.

But we already know it is not.

Lest we forget what the photograph is at its core. It’s a ‘selfie,’ a photograph of oneself taken to express a personality. In this single instance we are left with just two theories on what we are seeing without context; an artist so far up his own proverbial that all meaning has been obfuscated or an unworldly ‘trailer park’ American child who’s impressionable mind has been radicalised by the far right. 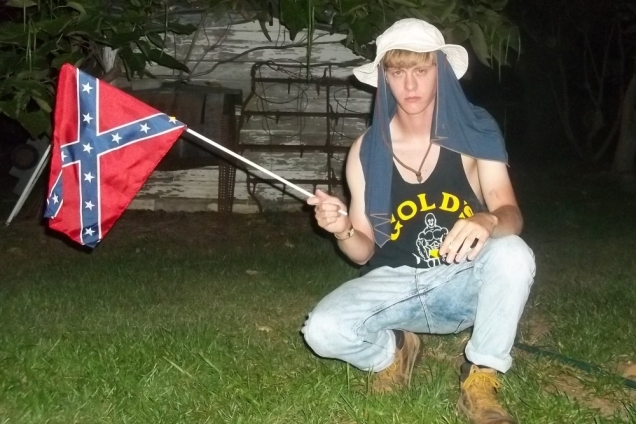 Considering with context the argument that Dylan Roof was a deranged, disillusioned psychopath is easily maintained. It is unthinkable that anything other than pure luck on his part caused the photograph’s compositional elements to fall together so naturally.

What compelled me to write about this image above all others is the sheer amount of contradiction presented. I find the ‘vernacular’ photograph in all instances more interesting than anything thoughtfully composed. I am repulsed by all actions taken by Dylan Roof and do not condone or try to apply reasoning to them. My interests lie in the photograph as presented.