How would you fare if a news publication offered you to “name your price” for a photograph from your archive that you knew was likely to be taken out of context? That’s exactly the conundrum photographer Samuel Hardy was faced with last Saturday when approached about a photograph he’d taken of Jeremy Corbyn at a pro-Palestine march in 2012.

For those that haven’t been following recent events in the UK, left wing veteran politician Jeremy Corbyn, the man seen smiling in the above photograph has just been elected leader of the Labour party with a landslide victory, despite starting the race as a 500-1 outsider. His rise to power has been a source of continued contention by the press and prominent figures within the party he now commands and it seems that some are still trying to make the mud stick.

Samuel Hardy was recently contacted by leading Israeli newspaper ידיעות אחרונות Yedioth Ahronoth about a photograph he had snapped and uploaded to stock agency Demotix of Corbyn, but it didn’t take him long to suss out what was so special about the image. He recounted the conversation on his Facebook page. 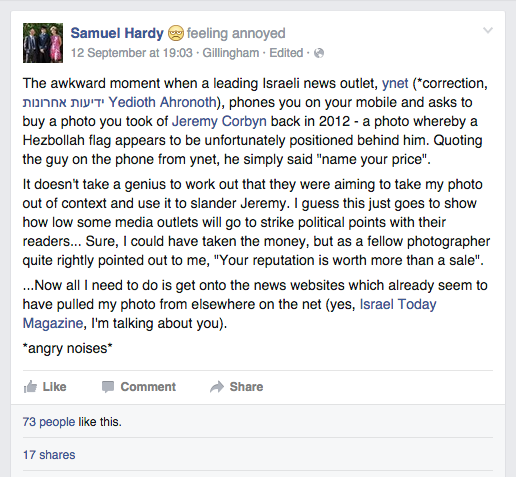 Remarkably, Hardy, who is a Jeremy Corbyn supporter and who voted for him in the leadership elections declined the offer to name his price and removed the photograph from sale. Refusing to sell the image knowingly to an organisation that was going to misrepresent for political gain is a test of ones morals or as Hardy points out, his reputation.

The issue here, unbeknownst to Hardy at the time was that the yellow flag Labour’s now new leader was standing in front of and looking cheerful is that of Hezbollah, the Lebanon based Shi’a Islamist militant group, an organisation officially designated as terrorists by much of the West, including the UK.

According to Hardy, the photograph was taken on August 17th 2012 at the annual pro-Palestine “Al-Quds Day” march in London where lots of speakers from many different parties and political groups were speaking. We caught up with Hardy to get the background and a more official context of the contents contained within the frame. To put it simply, he says it was nothing but mere chance and poor timing that lead to the awkward juxtaposition:

Jeremy Corbyn was [by] himself just standing to the side listening to the speakers. I turned to get a shot of him and he smiled back at me – at the time, I did not realise that the flags were of the Hezbollah group (had I realised at the time I might have tried to framed a photo without the flag), although it was clear to me that Jeremy was not posing with the flag – the two men behind him were simply passing by.

Hardy has said that he is following up on a few of the Israeli bloggers who stole the image before it was removed from all online sources but doesn’t expect to hear anything back from them. In the meantime though he received a response from the publication who have said they’ll respect his decision not to sell.

How do you feel about the photograph and what it depicts? As a photographer would you have handled the situation differently? Let us know your thoughts in the comments.

The above photograph was used with EXPLICIT permission granted by the photographer. Please don’t be that guy; if you want to redistribute, please contact Samuel Hardy on samuel.hardy@blueyonder.co.uk for licensing requests.

20 thoughts on ““Name your Price” No, says Photographer to Agency Preparing to use Corbyn Photograph out of Context”