Earlier this morning news broke concerning allegations that the Prime minister of the United Kingdom had performed an egregious act on a dead animal during an initiation into the infamous Bullingdon Club. The story was revealed in a a new book Call me Dave: The Unauthorised Biography which backs up its statements saying a source close to the MP has seen photographic evidence of the lewd act. We ask, can a photograph bring down a government?

Despite the hashtag #Piggate only being a few hours old Twittersphere has erupted with joy at the story and filled news feeds with dozens of photographs of David Cameron being used out of context. Indeed David Hartley‘s photograph of a happy looking David Cameron holding a piglet named after his daughter offers the perfect comedic statement for anyone happy to wash over the facts. The dark humoured satirical TV show Black Mirror penned by Charlie Brooker features a now very familiar act (above). Those who once questioned the probability of something happening will now be laughed at. Even he didn’t see it coming. But all these depictions of imagery are made up, out of context, satirical gestures that will bear no weight on this moment in history. The presence of this particular photograph, though and whether it exists will be the evidence journalists are waiting for with bated breath.

We take a brief look at four examples where a photograph has had the power to change political motivations and possibly end careers.

I Did Not Have Sexual Relations with that Woman.

The pig’s head is David Cameron’s Monica Lewinsky. That’s not to say Lewinsky in any way represents an animal, but the media treated her in much the same way; not a victim but instead the end goal of a scandalous story. It was this photograph that surfaced that gave drive to the eventual impeachment attempt on Clinton.

Over the course of the affair, Clinton and Lewinsky were photographed many times together, however the story was eventually defined not by the official White House monochrome grainy image taken after an earlier radio show in which both parties looked cheerful, but the striking, World Press-esque scene above which featured an embrace of two people who looked very much in love. Much like our more contemporary Tory folk-tales the allegations needed a photograph to run with, and although Clinton served his full term, the American people voted in a Republican as his successor. Pictures can’t talk, but if they could the grandeur of this frame would be telling.

The Bastards Got me, They Won’t Get us All.

Alexander Litvinenko was murdered in 2006 by ingesting a lethal dose of a radioactive substance in his tea. This method of murder had a terrible twist, as the world had to watch the former Russian Spy die in his hospital bed from radiation poisoning. Despite the story making the front pages, no photograph of Litvinenko was initially seen. A public outcry demanded visual confirmation of his impending death, and they got it:

The Photograph made waves throughout the UK and Russian media along with the quote from Litvinenko “The bastards got me, they won’t get us all.”  Yet despite the public thirst for a photograph to compliment the tragedy, Vladimir Putin who purpotedly knew of the murder plot remains as powerful as ever at the helm of Russian government. The photograph didn’t change a thing.

Most recently, the photograph of a three year old deceased boy on the shores of Turkey which we chose not to publish had a profound effect on public opinion towards the Syrian refugee crisis. The tragedies were already being felt across Europe but it was photographic imagery that eventually changed government policy into relaxing immigration in the UK. The photograph didn’t lead to any ministers losing their jobs, but it was powerful enough to shift the politically right winged atmosphere of the day. 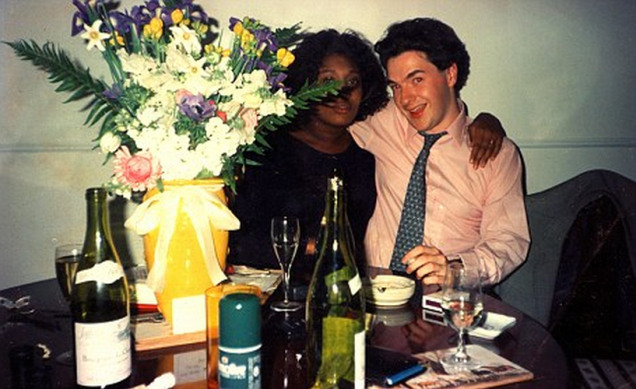 Somewhat closer to home for David Cameron is the scene above of his best friend, right hand man and chancellor George Osborne enjoying his evening with a stripper and lines of cocaine on the table. It was said at the time of its release that this photograph would end with his political career in tatters, however Osbourne has managed to go from strength to strength and is now arguably the most powerful man in the country.

DAVID CAMERON AND THE PIG’S HEAD

We can be certain by looking back on the past that the photograph will eventually resurface. We don’t know the contents of it yet and have only been made aware of the major detail of what it contains. We can only imagine the complete scene…

David’s face is glowing that trademark red around his upper cheekbones, he sports a nervous smile, a laughter almost. He’s surrounded by tuxedo-laden Bullingdon club members lead by George Osbourne egging him on with their hooray fists punching the air. Boris Johnson looks on from an angle while taking a large gulp of his brandy. The mood is hilarious, debaucherous, disgusting perhaps illegal. The photograph appears on the front page of every newspaper in Britain and beyond. The prime minister stuck his penis in a pig’s head.

Is it defensible? A common argument is that Cameron would have been in his formative years, naive with his impressionable youth abused by more elder members wishing to hold “dirt” on him should he ever reach office of importance. But does that matter to heads of state across the world? Will Angela Merkel, Donald Trump or any single one of the Muslim leaders throughout the Middle East ever feel comfortable shaking this man’s hand again? With a photograph I doubt it. The story, with all its ready to go pop culture references is here to stay, the only thing left to finish with is the imagery.

Can a photograph bring down a government?

Yes I believe it can, but the fact is never before have we been presented with such an utter, absurd pretext of a prime minister committing bestiality with a dead pig’s head.

We’ll leave you with this tweet from Charlie Brooker who has spent the morning going through his Black Mirror archives.

Perhaps the least prescient line from the script. pic.twitter.com/xrXZ3tsaW3

2 thoughts on “Can a Photograph Bring Down a Government?”