Brace yourselves for a nerd boner of epic proportions. Scientists have managed to resolve enough pixels to directly image an exoplanet orbiting a star 60 light years away. It’s a six second video (shorter than a Vine even) but its contents give rise to a promise of what is in store for the future. 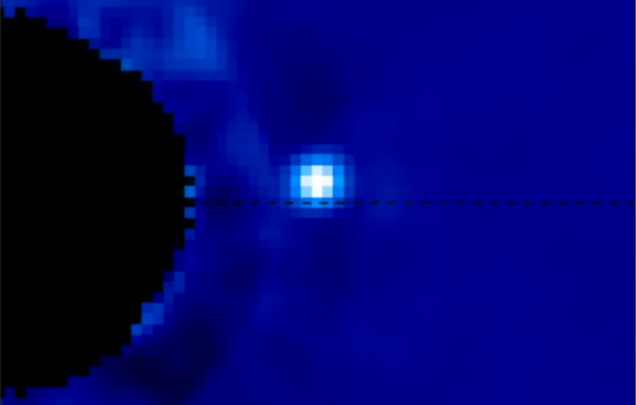 How far away is Beta Pictoris b exactly? Sixty light years distant is roughly 570,000,000,000,000 km from Earth (five hundred and seventy thousand, billion kilometres.) Quite impressive if you consider it took us ten years to send a Spacecraft to Pluto (4 billion km away) to image as just mere pixels.

Scientists have managed to directly image exoplanets before on a handful of occasions. The vast majority of discoveries of distant bodies, both rock and gas giants orbiting stars have been discovered using indirect methods by measuring a drop in brightness of a star as a planet passes it or by detecting a slight gravitational wobble. What makes this so special though is we can see its movement, giving a whole new dynamic to the scene.

A series of images taken between November 2013 to April 2015 with the Gemini Planet Imager (GPI) on the Gemini South telescope in Chile shows the exoplanet β Pic b orbiting the star β Pictoris, which lies over 60 light-years from Earth. In the images, the star is at the centre of the left-hand edge of the frame; it is hidden by the Gemini Planet Imager’s coronagraph. We are looking at the planet’s orbit almost edge-on; the planet is closer to the Earth than the star.

If we were to face our telescopes toward Beta Pictoris b the light from its host star would completely engulf the planet, which is why a team of engineers worked on specialist imaging equipment to block out the light from the star to reveal the planets movements.

What we can really take away from this is that it is just a taste of our immediate future. The telescope used to see Beta Pictoris b is in Chile, within the confines of our skies. In a couple of years the James Webb Space Telescope will be launched out of Earth’s atmosphere to an orbit called L2 where it will open up its giant mirrors in the vacuum of Space and give us views of the universe that we certainly cover here on Phogotraphy.