Moscow based artist Dmitry Morozov has designed a digital camera by reengineering a Gameboy classic, accompanying thermal printer accessory and a GUN!

He calls it the 8-bit Instant Photo Gun, and that’s exactly what it is. Despite looking like a movie prop from a futuristic steampunk-esque film like Mad Max, the camera is actually quite functional. Albeit a certain taste may be required to appreciate this certain output aesthetic.

The thermal printers & camera were sold as an accessory to the Gameboy over a decade ago. With under 1 Mega-Pixel of power they are slowly starting to creep bag into the digital-hispter’s bag. Morozov has simply repurposed the entire system to work with a gun’s trigger. 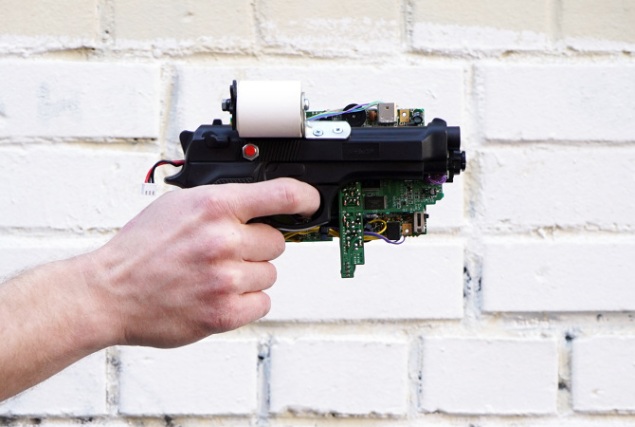 We appreciate thinking outside of the box and trying out new ideas and designs however flawed or ugly, however this. let’s face it ‘toy camera’ or ‘toy gun’ sparks some disturbing comparisons to events happening in America right now: